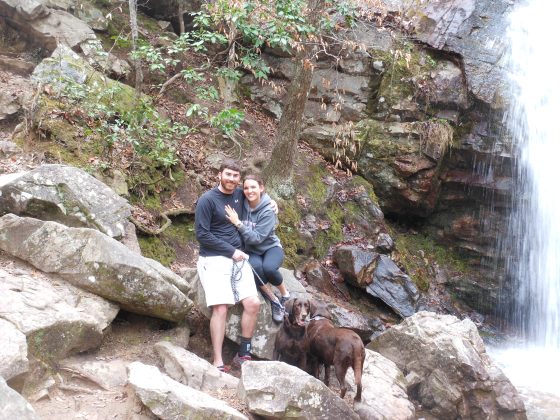 Our engagement story starts with Lindsey’s 30th birthday. Darren planned a weekend full of surprises! On Friday night, March 14, 2014 (Lindsey’s 30th birthday) he took her to Bottega Favorita for a fancy meal then surprised her with dessert at her parents house. Saturday morning Darren invited her over for a homemade breakfast of eggs, strawberry and blackberry crepes, and mimosas (Lindsey’s favorite). Then they packed up the dogs (Bailey & Emma) and a picnic and headed to Oak Mountain to Peavine Falls. They hiked around until they found a spot at the bottom of the falls where they had a picnic early on in their relationship. Darren hopped over the stream to the other side to attach his camera to the rock to take a picture. He set a delayed timer for 10 seconds and ran back over to be in the picture. The picture was a success but Darren said he wanted to take one more. He pretended to set the timer again and ran back over while Lindsey said, “The light’s not blinking, the light’s not blinking. Hey babe, did you hear me? The light’s not blinking.” Darren said “Oh well. We can try again later.” but actually he had set the camera to record! Darren then started talking about all the things he loves about Lindsey and a few minutes later got down on one knee and proposed! Lindsey cried, and hugged, and kissed, and cried some more. Then Darren said, “Smile for the camera!” as Lindsey wiped the tears from her face. Then they hiked around and took a picture at the falls (pictured above) then found some picnic tables to have the picnic that Darren packed.

That night, Darren told Lindsey that they were meeting a few friends for dinner and he wanted to surprise them with the engagement (his way of keeping Lindsey from posting the engagement on social media!). He took her to Iron City where there were not only a few friends, there were ALL of their friends and family. Everyone yelled, “Surprise!” and Lindsey held up her hand and yelled back, “surprise!” There were more tears. It was an amazing night full of family and friends!

Leave a note for the happy couple... Cancel reply